You know the saying, when life gives you lemons, make lemonade?

Well, we decided to apply that to dandelions last week!

It all started when we walked outside to see a sea of dandelion blooms dotting our grass with happy, yellow splotches. It brought to mind my friend Heather’s brilliant easier-than-weeding plan to arrest the spread of the dandelions in her yard. She hired her four boys to pick them, paying them per flower.

I offered a deal that couldn’t be turned down to my two oldest boys: 1 cent per flower. They paused and I feared they would scoff at my low-ball offer. But, seeing as they have precious few opportunities to make money around these parts (something we’ve been meaning to remedy), they got busy. Pails in hand, they fanned out across the yard, hunched over in determination to rid the yard of the splashes of sunshine. (Can you tell I have mixed feelings about losing out on their beauty? Plus childhood seems so much sweeter with plenty of dandelions to make wishes on and blow their seeds into a carefree dance on a spring breeze.)

My father arrived soon after and, learning of the kids’ mission, mentioned that we should use the dandelion flowers to make soup! He had tried a dandelion soup while living in China and liked it. We had used dandelion greens in salads before, but I had a long list of to-dos that day and making dandelion soup was not high on it. Yes, I know, my father’s words can be well worth listening to, but I tried not to this time.

By the third time he brought it up, the kids had amassed enormous piles of dandelions in their pails which my father estimated was going to cost me $9 a pail! Even the kids were shocked at how many they had picked in such a short time! Thankfully, my tender saplings cut me a deal and the whole lot came out to $9 instead of $18. Love their generosity!

About then, I took the soup idea seriously and googled it. There were no Chinese recipes in the top ten, but this cream of dandelion soup recipe from Nature’s Nurture came up and I decided to give it a go. I liked how the recipe made use of the leaves too. We pretty much followed the recipe as written, but did not use any buds in our soup. 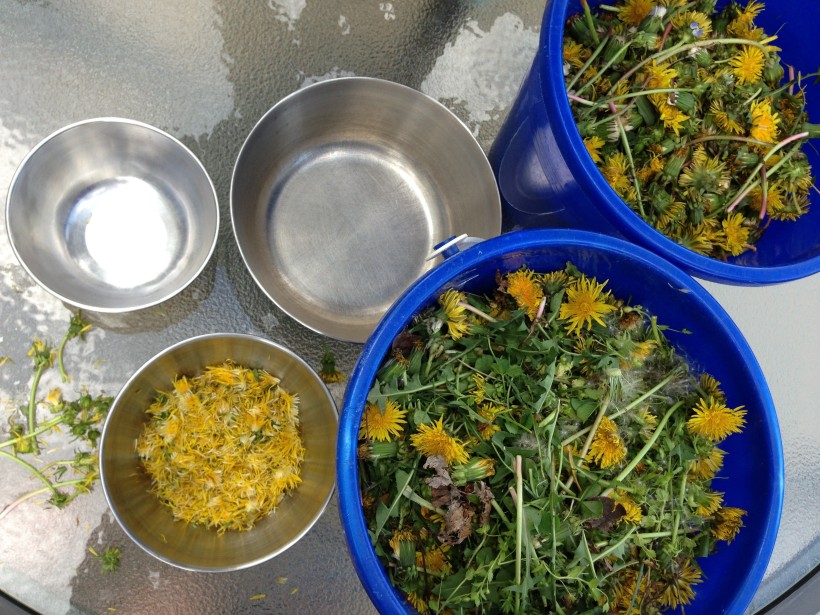 Once we had enough petals and leaves stripped of grass and ready to wash, we set to work making the soup. It smelled so good, looked lovely, and tasted delightful!

Ok, my father, husband, and I loved it. My oldest son’s take on it was somewhat different:

“I almost threw up. It tasted great though. But my brain would not accept me eating flower petals.”

The younger two wouldn’t even try it. You know how they say some people need to try certain foods fifteen times before they like the taste? We’re thinking of serving the kids dandelion soup a few more times to see if it will take.

Why not? The next morning we all woke up to another beautiful sea of golden dandelions decorating our yard, though apparently 1,800 fewer than there might have been.

We wish you a happy May Day – an ancient springtime celebration found in the Northern hemisphere, best known in the United States by the maypole dances – and invite those of you with abundant dandelion blooms available to put your kids to work foraging for tonight’s dinner. 🙂

What spring recipes do you love? Is there anything special you do to celebrate May Day?

5/3 Note: It may seem obvious to you, but the hidden virtues lessons in the dandelion soup experiment have been gradually revealing themselves to me over the last few days. I just love how this was one of those spontaneous life experiences bursting with opportunities for the kids to grow noble:

What else do you see as virtues that the dandelion picking and soup-eating cultivate? Joy? The kids seemed to enjoy plucking flowers off the dandelion stems. Honesty/Truthfulness? Our oldest was very articulate about liking the taste but not the concept of the soup. Others?

Emily is homeschooling mama to three amazing boys, whose alarming growth and appetites keep her running laps to the grocery store. She writes about loving life amidst the piles of laundry and legos. When life is just too much, she binges on chocolate and plans a dream trip around the world.

One thought on “May Day Fun: Dandelion Soup Recipe”

Grab our Global Kids Gift Guide button to add to your site! 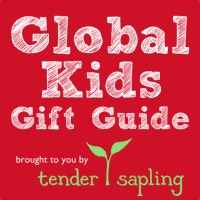